Difference Between Angels and Demons[]

Angels are beings who reside in Heaven. Their bodies are covered in holy armour that protects them while also channelling their power. Angels are very dignified and kind. They are orderly, proper and have a strong sense of justice. Though not strong on their own angels are very effective in groups and can be quite formidable when facing a large number of them. There are many different ranks of angels but instead of being Hierarchial these ranks relate more to the angel's role instead of their level of strength. Angels are often associated with white, gold and soft colours and will always have a pleasant appearance.

Demons are beings that reside in Hell. Demons have many different shapes ranging from gigantic beasts too small humanoid creatures. Low-level demons are very bestial while high-ranking demons can be very dignified and refined. Demons can have all sorts of personality traits depending on who they were in life. Demon society works around a strength system because of this demons can be ranked and categorized based on their strength. Demons often associated with red, black and harsh colours and have very horrific appearances in their natural forms. 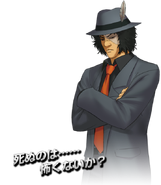 The Administrator
Community content is available under CC-BY-SA unless otherwise noted.